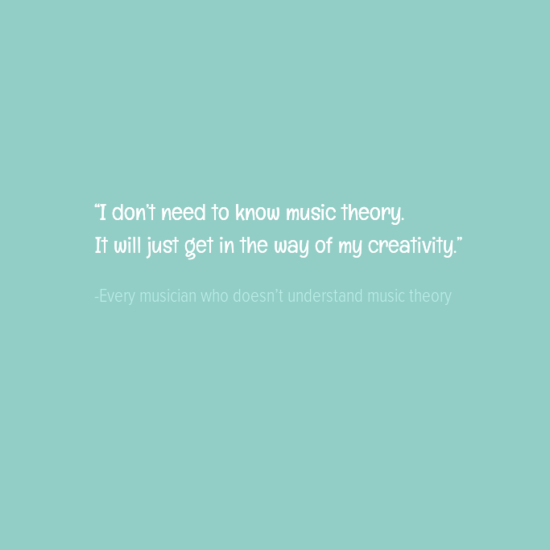 “I don’t need to know theory. It will just get in the way of my creativity.”

Many (dare I say, “most”?) musicians go their entire lives with little to no knowledge of music theory. Of course, these musicians tend to be amateurs and hobbyists. However, there’s a handful of pros who never bothered to learn music theory—some of the greats, in fact. Guys like Jimi Hendrix, Stevie Ray Vaughan, Eric Clapton, and even film composer Danny Elfman created highly successful careers in music without ever having learned the rules of the game, so to speak. So, what does this mean for the rest of us?

First of all, it goes without saying that these are examples of outliers. They were all gifted with an extraordinary ear, allowing them to understand music in their own way.

(Sometimes I wonder if Hendrix himself referred to an E7(#9) chord by name, or if he just called it “The Hendrix Chord” like his successors.)

Taking this into account, there is no definite answer as to whether or not you need to learn music theory. BUT…and this is a big “but”…it’s very likely that you are not in the 0.000001% of players like those mentioned. They also worked incredibly hard at their craft, allowing them to bypass some of the most traditional methods of learning.

For the rest of us mere mortals, let’s consider an analogy.

Imagine you have a 5-year-old son who wants to get involved in sports. Other kids in the neighborhood have been taking up soccer and your little boy is inspired to start playing, too. Here’s a question for you: What’s the best way to help your son develop into an effective soccer player? We’re not talking about priming him for the pros; just becoming effective on the field.

Would you explain all the rules, positions, and strategies before tossing a ball his way? Of course not! Theory (i.e. “rules) are far too abstract for anyone to learn prior to real-world experience. This goes for kids, adults, and everyone in between. The first step to effective learning is to get out there and try it. Mess around and get a feel for it. This heuristic approach will give context to the rules.

Of course, your son might be naturally gifted in athletics. He might be able to run faster and kick the ball farther than most kids his age. He might be “the Jimi Hendrix of soccer”. Then…he starts getting a whistle blown at him every minute or two. Why? Because he’s offside. Because he’s fouling the other team. Because he’s taking the ball out of bounds. Because he doesn’t understand the RULES.

Now that your son has gotten a feel for the game and experienced the perils of ignoring the rules, he’s eager to figure out how to keep the game going without causing any whistle-blowing. He’s ready to learn the rules of the game and how to strategize a game plan within the confines of those rules. From week to week, month to month, and year to year, your son develops into a formidable opponent on the field.

Think about this as you continue your development as a musician. Sure you can play by your own rules. You wouldn’t be the first. But imagine how much more effective you would be (not to mention how much faster you would learn and retain new information) if you took an interest in the rules of the game.

Check out Part 2 of this article for more on music theory.